“What?” Tom asked. I was staring at the computer screen. Tom was watching the Waltons and scrolling through Facebook. That’s how we roll on cold winter evenings with a warm fire flickering close by.

“Scanxiety. It’s an actual “thing” to describe how cancer patients may feel about going back for scans after treatment is over, even years later,” I said.

I was feeling a little wounded at the thought of scheduling my annual PET scan. The thoughts went something like this:

1. It’s not about learning whether or not they see any cancer, as much as it is about all that has happened before – a little emotional PTSD after the physical cancer-war armistice.

2. The doctors don’t “get”, or have time to get, my personal journey and all I’ve been through (and all ANY cancer patient and their families have been through, some far more than me). And I suppose it’s not their job to get it. The surgeries, colostomy, ileostomy, take-down, chemo, radiation, and physical after-shocks from medical treatment that still linger in a more muted way; determination to juice when cancer returned and refusal to do exactly what doctors told me until I had peace about my decision on how to proceed; God’s kindness in allowing the second round of treatment + juicing and supplements to show no cancer; fatigue and occasional mental block that I suspect are lingering gifts from medical treatment; a body that has done remarkably well in recovering but that groans and creaks in ways beyond “just being over 40”. And, finally, the mental and emotional exhaustion at the thought of maybe, possibly, having to cope with it all again if the scan shows something I don’t want to know is lurking in my cells.

3. The awareness that all of #2 is a small price to pay for the luxury of living and being in the lives of my family.

4. The realization that #3 is true, followed by an irritation that wonders if the physical and emotional price we deem acceptable is still way too high for cancer survivors to pay from successful – or unsuccessful – standard medical “treatment”. Isn’t there something about “do no harm” in some oath somewhere? Chemo and radiation do great harm on the march to obliterate rebel cells.

5. And finally, the plain selfish truth is that I’ve started… slowly… feeling like I’m not defined by the cancer. Calling to schedule a scan pulls me right back emotionally, mentally, and maybe physically, into still being a cancer patient. Which, I suppose, I still am. Drats.

“So what does ‘scanxiety’ mean?” Tom asked.

“It’s a noun that 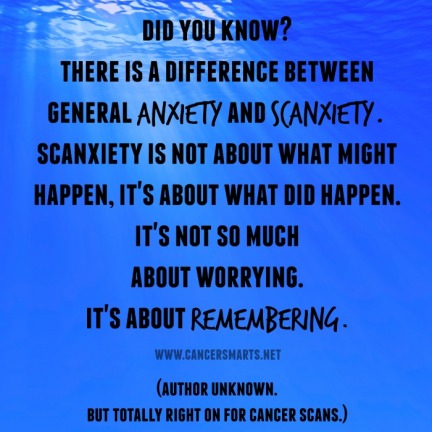 means the tension which builds, particularly among those who have or have had cancer, as they move towards their regular check up scan – hyper-scanxiety being the period as they await results.” I gave up reading and went into the world of the Waltons for the rest of the evening. And maybe a little Lawrence Welk.

A day or two later I finally called The City and asked if they could schedule my scan Locally. Tom’s advice, after listening to me spout off about my scanxiety, was, let’s schedule it where I feel comfortable. I should be able to get the scan locally and have results sent to the city; if there is a problem, we’d go from there. One piece of the scanxiety puzzle potentially solved – staying close to home. A bit of control in the uncontrollable.

“What is your name please?” the attendant responded when I called The City. I cautiously stated my desire to have the scan close to home. She went on to say, in a nice voice that sounded slightly like she had said this many times before, “You can ask to have the scan done locally; but the doctor here will determine if they will allow that request. If so, they will send the order to the place you want to have the scan. What is the name of that facility?”

I gave her the name of the facility. Three days later we’re still waiting for a response to my request. Clearly, they don’t follow Scanxiety Rule #1: Let’s not not call a cancer survivor back for three days… five by the time we get past the weekend… in response to a stressful scheduling phone call request.

Scanxiety Rule #2: “Do not be anxious about anything, but in every situation, by prayer and petition, with thanksgiving, present your requests to God. And the peace of God, which transcends all understanding, will guard your hearts and minds in Christ Jesus.” Philippians 4:6-7

How about you? Do you deal with scanxiety when you have a scan coming up? What helps you most?

PS: This summer I moved the “Sustain Me: Notes on Cancer” blog over to this new site: http://www.cancersmarts.net. So if you’re seeing “Cancer Smarts”, that’s still “me”. Thanks for reading!

This site uses Akismet to reduce spam. Learn how your comment data is processed.

Essential Oils (AKA Happy Hormones after Chemo and Radiation) 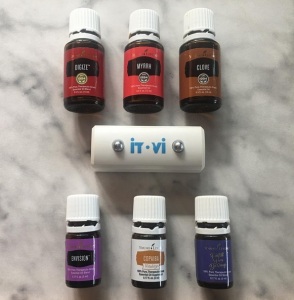 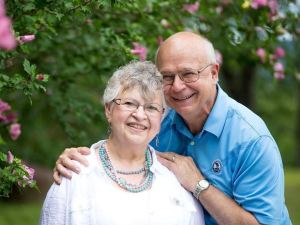 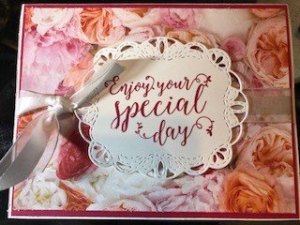 Stampin' Up Creations with Verna Mullen 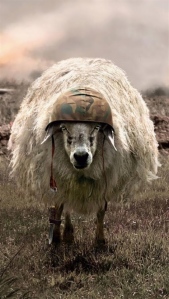 Even though I think I have some awesomely encouraging information to share about my personal journey with cancer, remember – the content on this blog is for general informational purposes only and is not intended for medical advice, diagnosis or treatment. It is highly intended to offer perspective and hope. I also include some affiliate links here on the blog, so if you happen click them and purchase something, I may get a small “thank you” from the seller. It helps me keep the blog up and running! (Sincerely, thank YOU.)